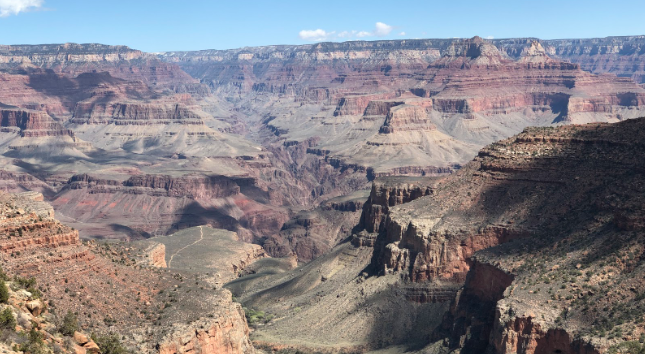 Spring break is a time for fun in the sun for everyone from naive grade schoolers to rowdy college students. Unfortunately, those sunny plans were brought to a halt this year by the frigid and gloomy weather of Chicago. I couldn’t see myself spending my well deserved break indoors so I decided to take a little trip to a few of our great country’s national parks with our local Ignatius Pilgrimage Club. Of all the national parks we visited, the Grand Canyon had the most impact on me by far. I was fortunate enough to be able to hike down and up the canyon and gained a true understanding of the importance of nature. This very same nature is at risk of being impeded on by the development of a resortesque project.

To clarify, there are plenty of resort-like establishments in and around Grand Canyon National Park; but none like this. This resort project, formally known as the Escalade bill, would include amenities such as retail stores, franchise hotels, and trademark restaurants. Putting the blatant attempt at domesticating the canyon aside; the most threatening aspect of this project is a gondola that would carry 10,000 visitors to the bottom of the canyon every day. It could be argued that this capitalistic venture could be beneficial for the park. The increase in tourism would result in more revenue from sales. It could also lead to more funding and interest in the preservation of not just the Grand Canyon, but all national parks.

On the other hand, while there are a few benefits; there are a plethora of downsides. The fauna and flora would be devastated by the excess foot traffic and construction needed to install a gondola capable of traversing the rugged environment of the canyon. Not only would the park be damaged, but the national park service have to pay for it out of pocket. Seeing as the resort would be privatized, the income would go primarily to the franchises who have a stake in the project. Those franchises would also own the land around their establishment which they could alter to their satisfaction.

Personally, I am against the idea of turning the Grand Canyon into a free for all of franchises. I spent part of my spring break hiking down into the canyon and then crawling my way out. I came to appreciate the serene nature and sacredness to accomplishing such a feat as hiking the canyon. A resort would draw  too much unwanted attention that will most likely harm the park more than it could help. Additionally, I am completely against the idea of a gondola. Hiking the canyon is not for the weak or the faint of heart. I by no means am boasting. On the contrary, I had to murmur “you need to be prepared to challenge what your body thinks are its limitations and capabilities” to myself throughout the hike. Seeing the bottom of the canyon is a reward that must be preserved. The moment we try to manipulate nature; is the moment we start not valuing it.