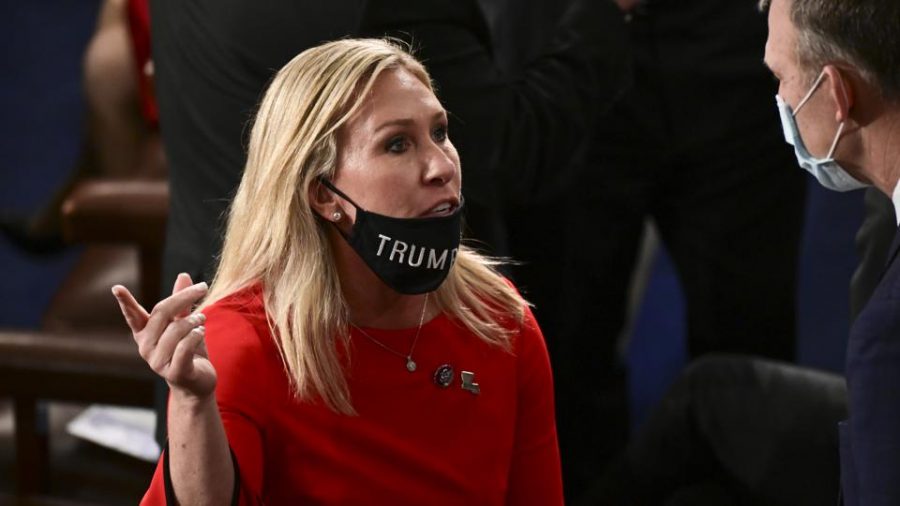 Georgia Congresswoman Marjorie Taylor Greene has been making headlines as her social media posts supporting and spreading conspiracy theories have resurfaced. A member of the Republican Party, Greene challenged the results of the 2020 presidential election on January 7th, the day after the storming of the Capitol. She also filed articles of impeachment against President Joe Biden just days after his inauguration, alleging abuse of power.

Greene has a long history of spreading misinformation on her social media accounts. In a video from 2017, she said “Q [of the baseless Q-Anon conspiracy theory] is a patriot, we know that for sure. . . . He is someone that very much loves his country, and he’s on the same page as us, and he is very pro-Trump.” She has voiced support for many more conspiracies such as that the 2018 California wildfires were ignited by “Jewish space lasers” controlled by a corporate cabal, including the Rothschild banking firm. She has claimed that President Barack Obama “is a Muslim” who “opened up our borders to an invasion by Muslims” and promoted the conspiracy theory that a passenger plane never struck the Pentagon during the 9/11 terrorist attacks. In a 2018 video, she said, “We had witnessed 9/11,…and the so-called plane that crashed into the Pentagon. It’s odd there’s never any evidence shown for a plane in the Pentagon. But anyways,…I’m not going to dive into the 9/11 conspiracy. But 9/11 had happened. Our country was very much into a war.”

Additionally, in January 2019 Greene liked a comment that said, “a bullet to the head would be quicker” as a way to remove House Speaker Nancy Pelosi. She also liked comments about executing FBI agents who she believed were part of the “deep state” working against Trump. Perhaps Greene’s most notorious incident yet is shown in a video from March 2019 that recently went viral. In this video, she berated Parkland survivor David Hogg, who was 18 at the time. In a 2019 interview with a Georgia gun group, Greene called Hogg an “idiot” who “only talks when he is scripted.” She has made claims that the Parkland massacre as well as the Las Vegas tragedy were staged.

Few fellow GOP lawmakers have yet to speak out against Greene. However, on February 2nd, Senate Minority Leader Mitch Mcconell said “loony lies and conspiracy theories are cancer for the Republican Party and our country,” and “somebody who’s suggested that perhaps no airplane hit the Pentagon on 9/11, that horrifying school shootings were pre-staged, and that the Clintons crashed JFK Jr.’s airplane is not living in reality. This has nothing to do with the challenges facing American families or the robust debates on substance that can strengthen our party.” Support from Democrats for a resolution to expel Greene from Congress is growing quickly. There are currently 61 Democratic co-sponsors on Rep. Jimmy Gomez’s resolution to remove Greene from office.