The Pack is Back!

A New Normal and Old Traditions for the Wolfpack 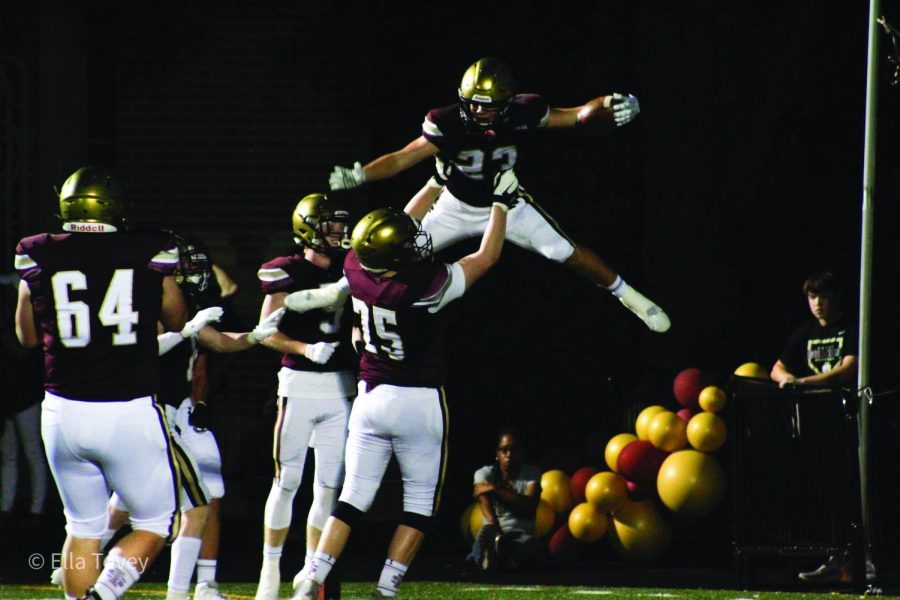 Will Mulchrone ‘22 celebrates with Vinny Rugai ‘23 after a touchdown. Courtesy of Ella Tovey.

The Wolfpack is back and it’s about time! Being back in school full time has made the Wolfpack feel much larger, and a huge freshman class has joined the Pack.

However, bigger classes mean bigger school spirit! The Student Council has already organized numerous events for the noticeably larger student body; after the past year and a half in lockdown, the spirit of the Wolfpack is bigger than ever!

The first event to kickoff the school year was Ignatius’ first home football game. The Wolfpack family came out to support the team in droves. The students’ energy was off the charts. It’s evident that everyone was enthusiastic to return to normal. The seniors and juniors led the student section in different chants and spirited activities while the underclassmen showed their school pride with posters and art. The energy of the student section transferred onto the field. The Ignatius varsity team played hard and won 70-0 against Von Steuben. It was a great way to start off the season and commence the school year.

Many students and teachers enjoyed the nostalgia of the film and snacks provided by the school. Students enjoyed laying under the stars and soaking up the warmth from their blankets. There was diverse attendance of students from different class levels. There was great turnout for a first time event, and many students are looking forward to a possible tradition for coming school years.

Homecoming weekend was also full of some exciting traditions. The annual Junior vs. Senior girls Powerpack game was held, and the Senior girls took home a win. Eloise Barnett ‘22 and Zelie Chua ‘22 were among the star players of the game, running in touchdowns for the seniors. All in all, the much anticipated game under the lights was a success!

The fall Pep Rally was hosted on Fornelli for the first time, and students packed the bleachers to celebrate all the Ignatius fall sport athletes. This was all leading up to the sold out homecoming game, which had huge student turnout, despite a tough loss to the Fenwick Friars.

Nonetheless, the Pack came out in full force at the Homecoming dance. The unconventional dance was a smash, with three food trucks and a few tents on the field. While many students were concerned that it might be a chilly dance, the weather proved a nice relief from dancing.

As the school year goes on, there are many more events to look forward to: class retreats, senior nights, and more. The Boys Golf team has already won their state championship, Ignatius has hosted their Model UN conference, and the Harlequins’ fall musical was a success. Students are clearly excited for the coming school year and to take part in Ignatius traditions and new events alike.